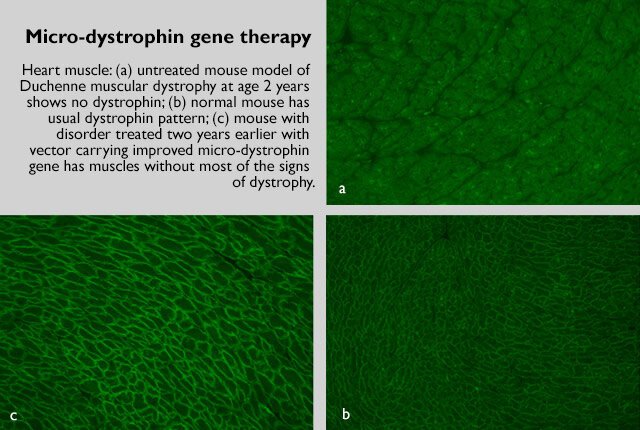 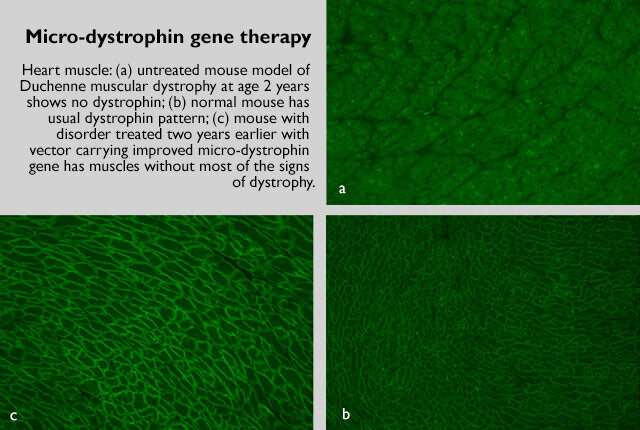 Experimental gene therapy cassettes for Duchenne muscular dystrophy have been modified to deliver better performance. The cassettes, which carry the therapy into muscle cells, contain newer versions of a miniaturized treatment gene. The micro-dystrophin, as the treatment is called, has been restructured to enhance its functionality.

The revamped versions were developed and tested at UW Medicine labs in animal models of muscular dystrophy. The results will be published Feb. 1 in Molecular Therapy, a Cell Press journal.

Duchenne muscular dystrophy is a life-shortening genetic disorder characterized by debilitating muscle weakness that gets worse with time. The condition almost exclusively affects males. It’s caused by X chromosome mutations that interfere with the production of dystrophins, which build and maintain healthy muscles.

Viral vectors are being explored as cargo ships for administering gene therapy for several kinds of diseases. For Duchenne muscular dystrophy, researchers are designing and testing vectors that send therapy directly into muscle cells. Some of these vectors target the mutations. Others ferry in a synthetic dystrophin gene.

Earlier versions of the UW Medicine-developed treatment cassettes did enhance muscle function in previous lab studies, but not completely. That’s partly because scientists have to condense the huge dystrophin gene to make it fit inside the transport virus.

Jeffrey S. Chamberlain, professor of neurology, medicine and biochemistry at the University of Washington School of Medicine, has been continuously involved in this research, from the invention of his lab’s original gene therapy cassettes to their recent revamping. His group was the first to show that adeno-associated viral vectors could deliver genes to muscles, body-wide.

Chamberlain is affiliated with the UW Medicine’s Institute for Stem Cell and Regenerative Medicine. He also holds the McCaw Endowed Chair in Muscular Dystrophy and directs the Senator Paul D. Wellstone Muscular Dystrophy Specialized Research Center in Seattle. The Center brings together scientists and clinicians from several institutions to investigate underlying mechanisms of various muscular dystrophies and to search for treatments, in the hopes of halting the progression of disease.

Duchenne muscular dystrophy can take away the ability to walk. Eventually the condition also affects heart and breathing muscles. Until recently, youngsters with the disease did not live beyond early adulthood and succumbed to heart or respiratory failure.

The newer gene therapy approaches for Duchenne muscular dystrophy were tested in animals with a similar genetic mutation. The cassettes were administered by intramuscular injection and systemic delivery.

According to the paper by Chamberlain and Stephen Hauschka, a muscle biologist and UW School of Medicine professor of biochemistry, and other researchers on the project, the newer cassettes served their purpose better than previous versions. The treatment increased muscle strength in the mice while protecting against contraction-induced injuries in some types of muscles. Its effectiveness was long-lasting.

To create better micro-dystrophins, the researchers introduced several structural changes to the down-sized genetic materials contained in the vectors. The new models carry unique combinations of four to six of the 24 spectrin-like repeats found in the full length dystrophin protein, and include some differences in the hinge domains. Hinge domains can impact the function of the micro-dystrophin by affecting its flexibility. Hinge domain problems can render the micro-dystrophin dysfunctional. Spectrin repeats are an assembly platform for cytoskeletal proteins and also have other roles.

One of the next-generation transgenes recruits the dystrophin-associated protein, neuronal nitric oxide synthase. That transgene is a component of the investigational gene transfer candidate SGT-001, which is being evaluated for safety and efficacy in Duchenne muscular dystrophy patients in an ongoing clinical trial. Solid Biosciences, a Boston-area biotechnology company, is conducting the clinical trial, which is called IGNITE DMD.