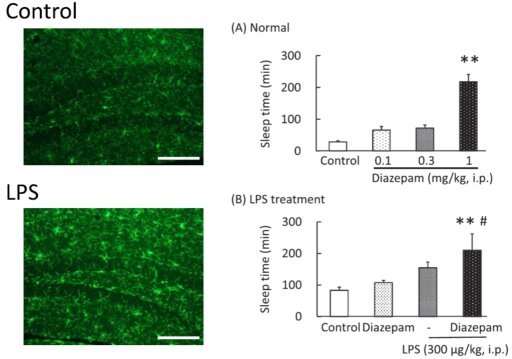 Inflammation in the brain enhances the side-effects of hypnotic medication 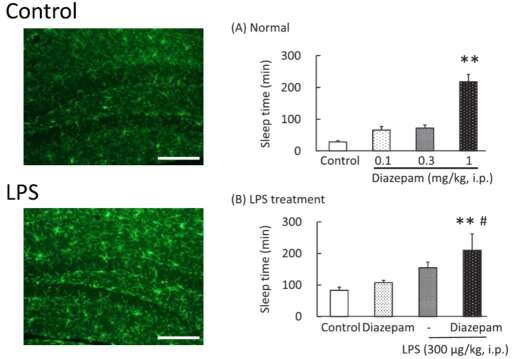 In a study recently published in the European Journal of Pharmacology researchers at Okayama University show how the presence of inflammation in the brain can increase its sensitivity to benzodiazepines.

Benzodiazepines (BZDs) are drugs commonly prescribed for anxiety, insomnia and seizures. However, in post-surgical patients taking BZDs, undue side-effects such as excessive sleepiness, weakness and delirium have often been observed. Associate Professor Yoshihisa Kitamura and Professor Toshiaki Sendo from Okayama University and colleagues have recently shown that inflammation, which is a normal after-effect of surgery, might be potentiating the effects of these drugs.

BZDs act by activating a receptor in the brain known as the GABAA receptor (GABAR). Typically, GABAR is activated by chemicals inherently present in the brain. However, because drugs like BZDs can mimic these chemicals, they are used to stimulate the activity of GABAR in the lab. When GABAR is excessively activated, animals tend to exhibit inhibitory effects, such as loss of consciousness and loss of normal reflexes. One such reflex observed in animals is the righting reflex, that is, their tendency to immediately prop back up on their paws, when made to lay supine. This suggests that the animal is awake and alert.

For their study, the investigators first artificially stimulated GABAR in the brains of mice, using a sedative called pentobarbital. As expected, pentobarbital induced a loss of the righting reflex (LORR). Under normal conditions, BZDs should prolong the duration of the LORR, as they activate GABAR even further. This was observed with a high, but not low, dose of the BZD, diazepam. Another group of mice was then treated with a bacterial endotoxin that triggered inflammation in their brains. When this group was given diazepam, it prolonged the duration of LORR even at a low dose, suggesting a sensitivity to diazepam in the inflammation-induced mice.

To address if these effects were specific to GABAR, a drug that inactivates these receptors was subsequently used. The duration of LORR in these mice was considerably reduced, confirming the role of GABAR. Interestingly, even when the mice were given a drug that reduces inflammation, the duration of LORR was reduced. Inflammation was indeed the culprit. The prolongation of reflex loss seen in mice given diazepam was thus linked directly to GABAR and inflammation in the brain.