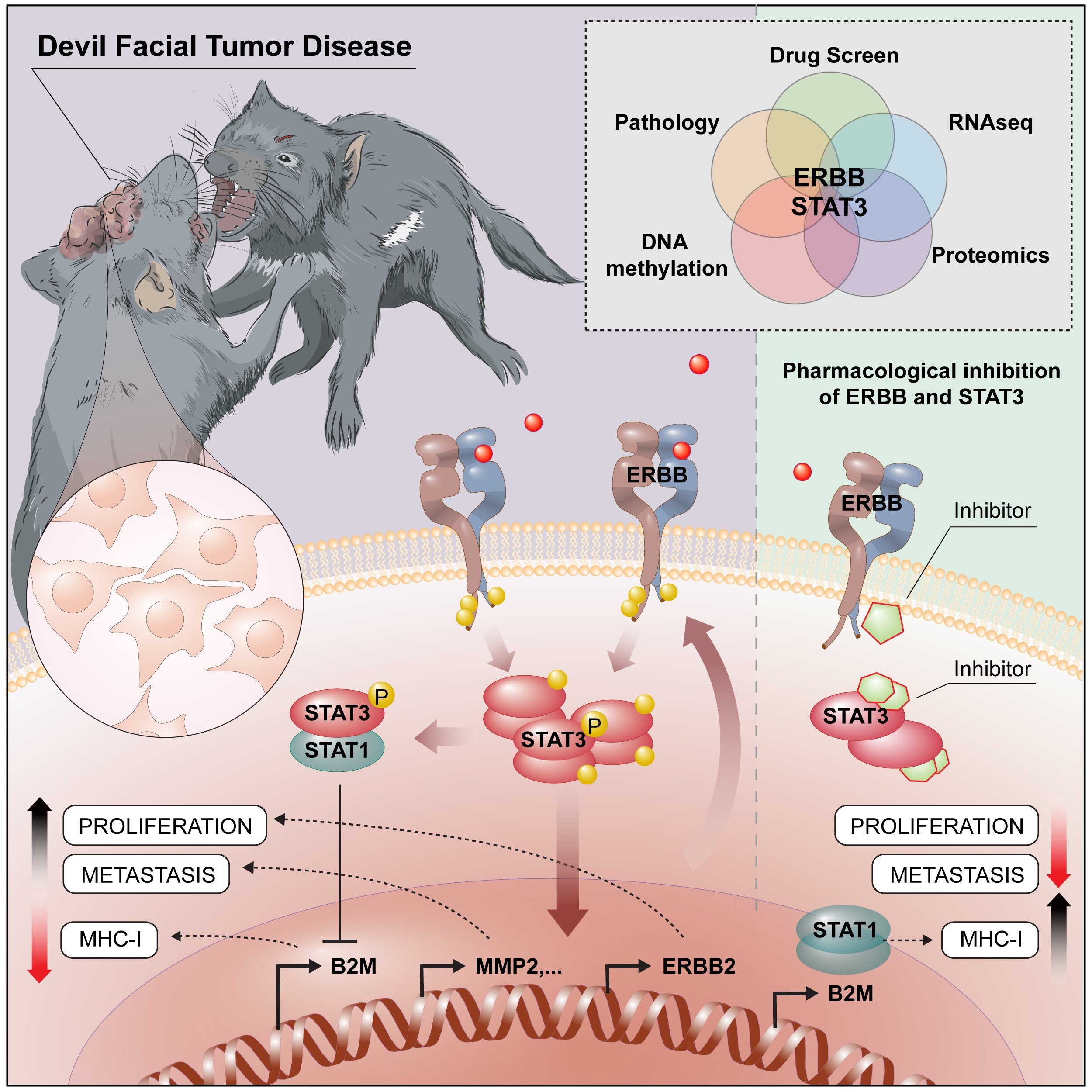 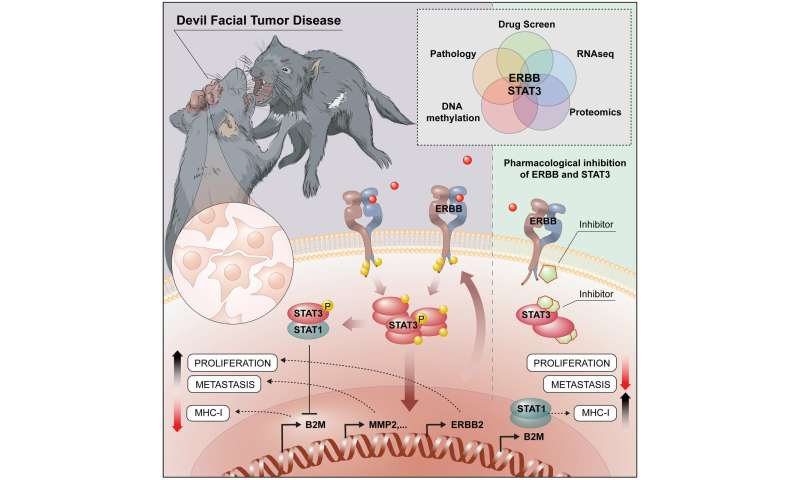 Tumors usually grow exclusively from where their cell of origin derives. In humans, apart from some rare cases like the accidental transmission through a cut during surgery, there are no reports of contagious cancer cells. A multitude of molecular safety measures of the immune system are responsible for rejecting and destroying such foreign tissue.

An exception to this nearly universal rule exists among Tasmanian devils, the world’s largest living carnivorous marsupial. For two decades, a deadly facial tumor has been spreading at a rapid pace among the animals and has killed, according to current estimates around 90 percent of the wild population. Peculiarly, the cancer cells are transmitted from one Tasmanian devil to the other by bites. All collected tumor samples are genetically nearly identical and derive presumably from a single cell of origin.

How this cancer became transmissible and by what means it escapes the immune system of its otherwise healthy hosts puzzled scientists since the discovery of the mysterious disease. Researchers from CeMM and the Vienna University of Veterinary Medicine have now solved an important part of this puzzle. In their latest study published in Cancer Cell, the research groups of Andreas Bergthaler and Richard Moriggl reveal the molecular mechanisms that are crucial for the transmissibility of the tumor.

The scientists found that receptor molecules on the surface of the cancer cells, so-called ERBB receptors, show massively increased activity. Those receptors trigger a biochemical chain reaction within the cells that eventually activates STAT3 proteins, transcription factors that alter the cell’s genetic program. The result is an extensive rebuild of the cell: The number of molecules serving as identification for the immune system are reduced, while at the same time proliferation is accelerated and factors for metastasis of the tumor cells are produced.

“Our experiments show for the first time that the excessive activation of ERBB receptors and STAT3 proteins play a key role in the transmissibility of the Tasmanian devil´s facial tumor,” Lindsay Kosack, team member of Bergthaler’s group at CeMM and co-first author, explains. “Above that, we showed in further experiments that the inhibition of ERBB receptors with a drug can selectively kill the cancer cells. This could play an important role for the treatment of the disease, before the Tasmanian devil becomes extinct.”

The study, conducted in collaboration with the Universities of Cambridge, Southampton, Toronto and Tasmania, is not only a contribution to preserve this marsupial species. ” About 99.1 percent of the Tasmanian devil’s STAT3 is identical to the human protein. And many of the genes that are activated by STAT3 in the animals are also active in human cancers,” Andreas Bergthaler says. “The biological principles of invasion of new tissues are also crucial for non-transmissible tumors, especially cancer metastases. Scientific aspects of cancer, contagious diseases and inflammatory processes can be studied with this rare phenomenon.”