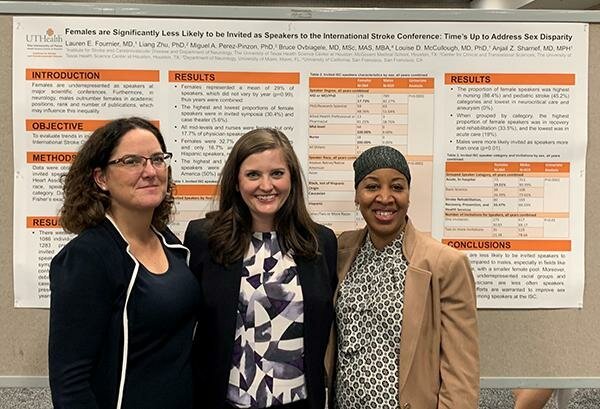 Neurologists speak out about gender disparity at global stroke gathering 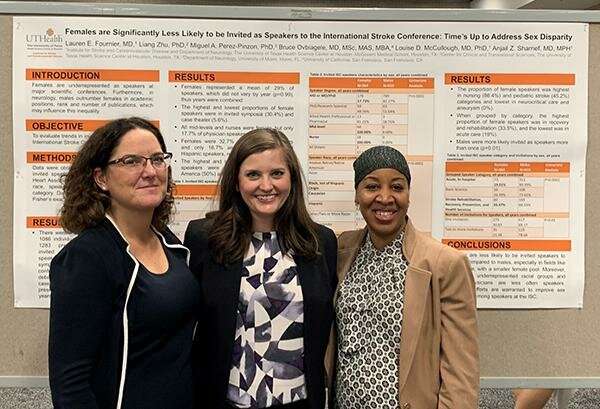 The International Stroke Conference (ISC) attracts thousands of neurologists each year to network with fellow experts and watch compelling presentations on the very latest advances in clinical care, science, and education. Joining those presentations for the first time was a rather provocative topic—gender disparities among the very presenters themselves.

The spotlight came in the form of research presented by The University of Texas Health Science Center at Houston (UTHealth), which was itself the focus of two posters and a mini-symposium. The two studies—one looking at invited speakers and another looking at submitted and accepted abstracts—revealed a significant underrepresentation of women.

“It’s important to shed light on statistics like this to generate a heightened awareness of gender disparities which have been entrenched in neuroscience for many years,” said Louise McCullough, MD, Ph.D., professor and chair of the Department of Neurology, who serves as the vice chair of the programming committee for the ISC.

“On average just 29 percent of invited speakers were women. Although it may be reflective of the field, I still find this quite staggering,” said first author Lauren Fournier, MD, fellow of Vascular Neurology at McGovern Medical School at UTHealth.

Findings showed the proportion of female speakers was highest in nursing (86.4 percent) and lowest in neurocritical care and aneurysm (0 percent). All midlevel faculty and nurses were women, but less than a fifth (17.7 percent) of physician speakers were women, according to the study.

The data also illustrated racial disparities. Women were 32.7 percent of Caucasian speakers, but only 16.7 and 12 percent of black and Hispanic speakers.

“The statistics illustrate how females are not submitting their science as much as males. They also show females who are participating tend to be more in specific roles,” said Fournier, who was also the first author on this study. “We need to encourage more women to pursue science, take on big studies, and become faculty members in academic research.”

By career level, the highest proportion of women with accepted abstracts were students/trainees at 40.7 percent.

“This is a positive sign, indicating greater gender balance in future years as more females enter the profession,” Fournier said. “We know there’s a smaller pool of women in neuroscience, but it also goes deeper. It’s about having strong faculty mentors to be advocates for their work and support them in taking opportunities to develop and advance in a male-dominated field.”

Fournier was one of four female and four male fellows with the stroke program at McGovern Medical School. She is mentored by McCullough and Anjail Sharrief, MD, MPH, assistant professor of neurology.

“Dr. McCullough and Dr. Sharrief are tremendous champions of women in science. Dr. McCullough organized a special luncheon at the conference for junior scientists and physicians like me to prepare for their career,” Fournier said. “These two studies are the result of a conversation we had last summer. Dr. McCullough suggested looking at this and I jumped on it. The fact both abstracts were accepted and I presented them is promising and shows the issue is being taken seriously.”

“The data shows we’re starting to turn a corner and I’m delighted that UTHealth is very much part of this progress as demonstrated by our stroke program fellows,” McCullough said. “The International Stroke Conference is a tremendous event to learn and share different perspectives and ideas, so it’s vital that women are given every opportunity to participate and fulfil their potential.”

Joining Fournier at the ISC was her 1-year-old son Henry.