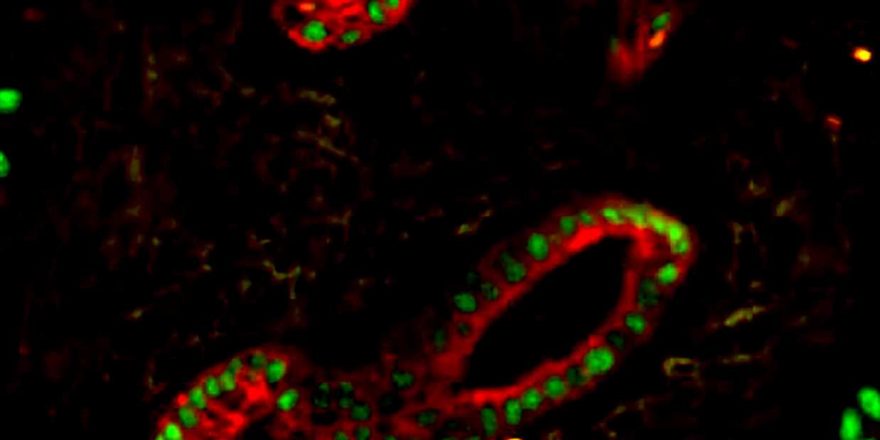 Removal of gene prevents development of pancreatic cancer in mice 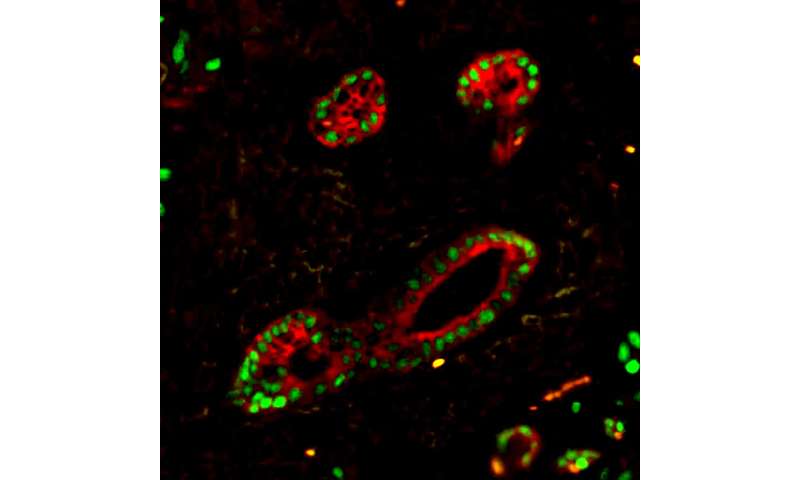 The action of a gene called ATDC is required for the development of pancreatic cancer, a new study finds.

The work builds on the theory that many cancers arise when adult cells—to resupply cells lost to injury and inflammation—switch back into more “primitive,” high-growth cell types, like those that drive fetal development.

When this reversion happens in the presence of other genetic mistakes, a repair process meant to start and stop quickly continues unchecked.

New details of this cancer-causing switch to primitive cells, and of the role of ATDC in pancreatic cancer formation, are revealed in a study of mice and human patient samples published online May 2 in the journal Genes & Development.

Led by researchers from NYU School of Medicine and the University of Michigan, Ann Arbor, the study found that ATDC must be active if pancreatic cells, when injured, are to re-acquire primitive stem-cell qualities and undergo the early steps that lead to the development of pancreatic cancer.

“We found that deleting the ATDC gene in pancreatic cells resulted in one of the most profound blocks of tumor formation ever observed in a well-known mice model engineered to develop pancreatic ductal adenocarcinoma, or PDA, which faithfully mimics the human disease,” says corresponding author Diane Simeone, MD, director of the Pancreatic Cancer Center of NYU Langone Health’s Perlmutter Cancer Center. “We thought the deletion would slow cancer growth, not completely prevent it.”

The search for better treatment in these cases is especially urgent, says Simeone, given that PDA has the worst prognosis of any major malignancy and is on track to become the second leading cause of cancer-related death by 2030.

The study focused on acinar cells in the pancreas that secrete digestive enzymes through a network of partnering ducts into the small intestine. These same digestive enzymes can subject this tissue to low levels of damage. In response, acinar cells have evolved to readily switch back into stem cell types resembling their high-growth ancestors, a feature that they share with pancreatic duct cells.

This ability to regenerate comes at a price, researchers say, because such cells are prone to become cancerous when they also acquire random DNA changes, including those in the gene KRAS that are known to drive aggressive growth in more than 90 percent of pancreatic cancers.

Specifically, stressed acinar cells are known to temporarily undergo acinar-to-ductal metaplasia or ADM, a step toward a primitive cell type to resupply cells. This sets the stage for a second shift into pancreatic intraepithelial neoplasia (PanIN), in which cells no longer multiply under normal controls.

In the current study, the researchers found that mutant KRAS and other genetic abnormalities induced aggressive pancreatic cancer in 100 percent of study mice when the ATDC gene was present, but in none of the same cancer-prone mice lacking the gene. Neither did acinar cells in the ATDC “knock-out” mice undergo ADM or transformation to PanIN.

To get a better look at the early steps in pancreatic cancer formation, the research team artificially caused pancreatitis in mice by treating them with cerulein, a signaling protein fragment that damages pancreatic tissue. ATDC gene expression did not go up right after the damage, but increased a few days later and in line with the timeframe required for acinar cells to reprogram genetically into their ductal cell forebears.

Further experiments confirmed that the expression of ATDC triggers beta-catenin, a cell-signaling protein that, upon receiving the right trigger, activates genes that include SOX9. Earlier studies linked SOX9 to the development of ductal stem cells and to the aggressive growth seen in PDA. Consistent with this work, the current study found that the inability of cells lacking ATDC to become cancerous was due to their inability to induce SOX9 expression.

The authors also examined ATDC expression in ADM lesions from 12 samples of human pancreatic tissue. The team found it to be more active in human ADM lesions along with beta-catenin and SOX9, and its activation increased further during the transition of ADM into human pancreatic ductal adenocarcinoma.