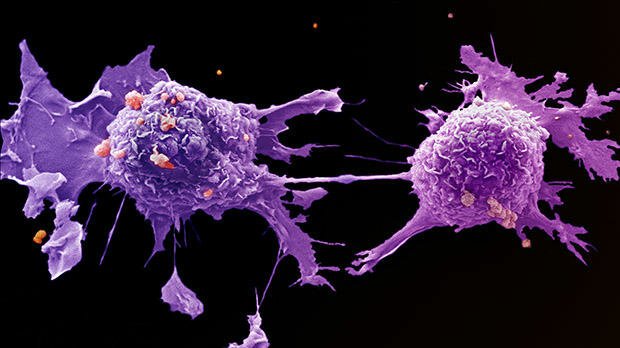 The immune system preys on growing lung cancers, forcing them to evolve to survive 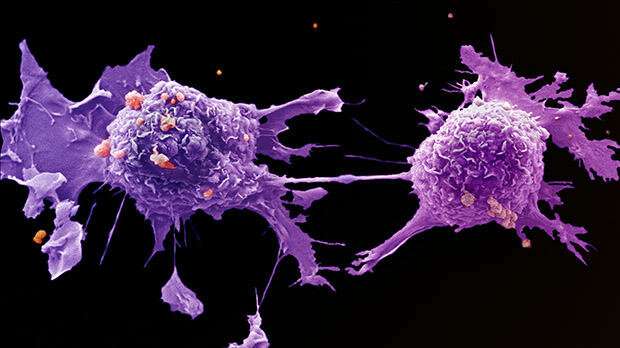 Charles Darwin is a founding father of evolution, describing how from simple beginnings “endless forms most beautiful and most wonderful” arise.

But while his theory describes the origin of species, it doesn’t just apply to animals and plants. It’s also true of cancer.

Like creatures adapting to survive in their environment, cancers are dynamic – growing and evolving in response to their unique surroundings, competing to survive.

No one knows this better than our TRACERx team, who are unpicking how lung cancers evolve in unprecedented detail.

They’re doing this by following almost 850 patients with the most common type of lung cancer from diagnosis, through treatment and beyond. But they know that zooming in on just the tumour alone isn’t enough.

Taking a leaf out of Darwin’s evolutionary guidebook, the team – led by Cancer Research UK’s chief clinician Professor Charles Swanton – is also exploring the environment that each tumour is growing in. And that means paying close attention to one of cancer’s biggest predators, the immune system.

“What we’re really doing is trying to understand what impact the immune system is having on tumour evolution,” says Dr. Nicky McGranahan, a joint lead for the TRACERx team at University College London.

And it looks like the approach is paying off. Publishing their latest work in Nature, the team has revealed just how big an impact the immune system can have on lung cancer as it develops.

Our immune system’s job is to hunt for potential threats, including cancer. It forms a big part of the tumour’s surroundings, putting pressure on the tumour to adapt to survive.

And according to McGranahan, understanding this environment is critical to cracking tumour evolution.

“It’s like Darwin’s finches – you can’t really understand any evolution without looking at the environment in which that evolution occurs,” he explains.

If you stumbled across Darwin’s finches in London’s Natural History Museum, you would see a set of similar, but not identical birds. You might notice that each bird has a unique beak when judged against others in the line-up.

But it would be hard to understand the full story behind these birds and their beaks without looking at where they came from.

To really appreciate Darwin’s finches, you’d need to take a journey to the Galapagos and get a feel for the different islands and beaches these birds lived on. Only then could you appreciate how birds living on islands less than 140 miles apart could have evolved such different appearances.

It’s only when you look at the whole picture that the story begins to make sense. And that’s what the TRACERx team are doing in lung cancer.

For their latest study, the team analysed samples taken from 88 early-stage lung cancers that hadn’t yet been treated. As well as looking at changes in the tumour cells’ DNA, they also looked at how much of the genetic code was being read by each tumour cell. When DNA is read, sections of the genetic code are made into a molecule called RNA, which the team tracked and measured. 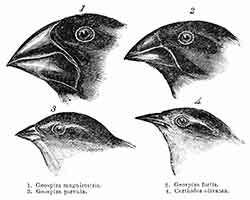 Finally, they looked at the environment surrounding the tumour cells in each sample, counting the number of immune cells that were present in each region. They were looking to see if tumour areas with a lot of immune cell activity had adapted differently to areas with relatively few immune cells.

And that’s exactly what they found.

A cellular game of hide and seek

“We’ve detailed many different immune evasion mechanisms that we think are occurring in these tumours,” says Dr. Rachel Rosenthal, who led the latest TRACERx study. “And a number of these haven’t been characterised before.”

The team found a host of different strategies that cancer cells were using to dodge the immune system. These ranged from more permanent solutions – such as deleting faulty bits of DNA that could signal to the immune system – to more temporary tactics.

One of the new tactics the team discovered was a more temporary fix. Some cancer cells were stopping parts of their DNA from being read. By doing this, the cancer cells temporarily halt production of altered molecules that sit on their surface, meaning immune cells might slip by and not spot a problem.

But perhaps the most interesting finding was where in the tumour these different tactics were employed.

Scientists have already discovered that not all tumour environments are the same. Some are densely packed with immune cells, while in others the immune landscape looks sparse. And there are those that sit between these two extremes, with ‘hot’ regions that are jam packed with immune cells and ‘cold’ regions with relatively little immune involvement.

The TRACERx team have discovered differences in the tactics tumours have evolved depending on the immune cell landscape. Parts of the tumour that are packed full of immune cells seem to be resorting to temporary tactics to keep out of trouble – including stopping certain bits of DNA from being read. Whereas parts of the tumour that have gone ‘cold’ have evolved more permanent solutions.

This helps to build a picture of how tumours adapt to their surroundings. And for McGranahan and Rosenthal, it begins to settle an age-old debate about how the immune system drives cancer evolution.

“This is something that has been contentious in the field – the extent to which the immune system plays an active role in these early stage, non-treated tumours,” says McGranahan. “Our data suggests that potentially most of the tumours once were hot and there’s a method they’re using to evade the immune system.”

Like Darwin’s finches, tumours are adapting to the pressures of their environment, finding ways to survive and grow.

The team now have a much better picture of the intricate relationship between lung cancer and the immune system. And they’ve come away from the exploration with a future direction in mind.

“The positive thing is that the immune system is definitely active or has been active in the past. So even in cases where we can only identify ‘cold’ tumour regions, it might be possible to reactivate the immune system,” says McGranahan.

This could be possible for the temporary changes that cancers cells are making to avoid immune system. But there’s a lot more work to do.