Home » Kids Health » I Fantasize About a Life Without My Kids 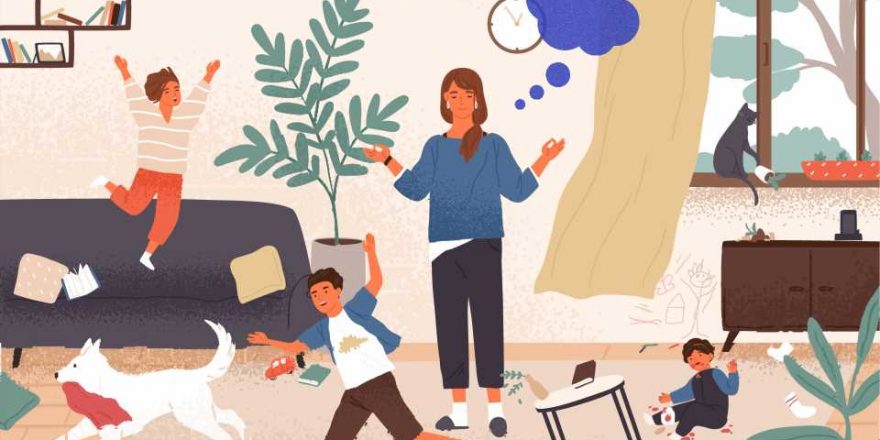 I Fantasize About a Life Without My Kids

I have an alter ego: She gets to sit on airplanes by herself and eat dinner without a kid whining at her for more milk (or wanting to have a seat on her lap). She can take a darn good selfie (aka her appearance is fresh, not I-haven’t-slept-well-in-four-years), and she doesn’t have to frantically tie up work at 5 p.m. She doesn’t freak out that any call on her phone might be daycare saying that someone threw up or their “ear looks like it’s falling off.” (It was a patch of eczema.) Oh, and when she spends her hard-earned money, it’s on clothes for herself — sans guilt. If you can’t already tell, my alter ego chose not to have kids. And she’s loving her life.

If you also can’t already tell, in my real life, I do have kids. Two boys, ages one and three. They’re sweet, sassy, and kind. The three-year-old is whip-smart, empathetic, and unafraid to strike up conversations with adults. It’s hard to keep my braggy-mama tendencies under wraps, so I won’t even try to do it here. But let’s be honest: Kids are rough. They are rough. I’m not the type of hot-mess mom who can move through life “embracing the chaos.” I have a personality that steers toward anxious, so I’m often bogged down by the overwhelm — moving through the day in survival mode and quite often on the verge of tears.

It’s then that I tap into my biggest mom secret: I fantasize that I don’t have kids. Sure, it sounds harsh. But hear me out. My alter ego, let’s call her Gessica, decided that kids weren’t for her and that instead she would fully embrace a badass writing career. She doesn’t have the burden of daycare bills that rival private college tuition, so she’s got quite a bit of disposable income to burn. As such, she takes awesome vacations.

One of my favorite fantasies is that my husband and I jet off for ski vacations to Breckenridge or Vail. We go for long, romantic weekends and stay in one of those ski-up rooms. (Keep in mind: I don’t ski. That doesn’t matter to my alter ego, though.) Gessica — get this — starts her weekend mornings lying in bed eating room service for breakfast, which includes a giant pot of coffee. Then, she takes a really long shower and looks forward to working out and getting a massage at the spa later that day. This is Gessica’s happy place; it’s my happy place. (Why it has to be at a ski resort, I’m not sure, but I’m not going to question it.)

Side note: The realistic side of me is fully aware that I would not live my life like this even if I didn’t have kids. But that hardly matters when it’s your fantasy, right?

I often call up my alternate reality when I’m walking my dog. I wish I could zone out when my three-year-old is nagging at me about how he “needs” apple sauce right now, but it’s hard to tap out of that moment. So, I wait for quieter respite.

I’m not sure why moving into non-kid mode is so impactful. Years ago, I reported on a story about the upside of negative feelings. There was research to suggest that daydreaming can trick your brain into thinking you’ve accomplished whatever you’re imagining. (Thus, the argument was that for big goals you actually want, you should avoid totally getting lost in daydreaming, as it quashes motivation, as your brain checks it off your to-do list). For the purpose of calming my nerves about being a working mom and navigating that world successfully, the fantasy life works.

Up until two weeks ago, I thought that the overwhelm was my fault. If I could just let things go, prioritize better, not raise my voice at my oldest, then I wouldn’t have the anxiety that necessitated taking a mental minute. On a girl’s trip to celebrate my friend’s 35th birthday, two good friends who also have kids expressed that they, too, feel as if they’re drowning all the time. They may not share my ski chalet fantasy, but they take a more practical step by tapping out on occasion, ignoring something that should get done but they don’t have the energy for.

Something else happened on that girl’s trip. I was alone. It was like I didn’t have kids! I sat in an airplane set all by myself (so roomy without a squealing baby clawing at you to go crumb-hunting on the floor), didn’t have the before-school rush to attend to, and, generally, my time was my own. There were no responsibilities except: me.

Oh my gosh, I was a mess. Repeatedly throughout the day, I would think about how it feels to hold my baby and what he’s like when he snuggles up on my shoulder after I lift him out of his crib in the morning. What my three-year-old’s hugs feel like with his spindly arms wrapped around my neck. Honestly, I was shocked that I was so discontent without them.

Happily, my three-year-old surprised me at the airport with flowers and a treat from my favorite bakery. That was the best part of my weekend. After that, I’m pretty sure my even alter ego would choose to have kids. Eventually.