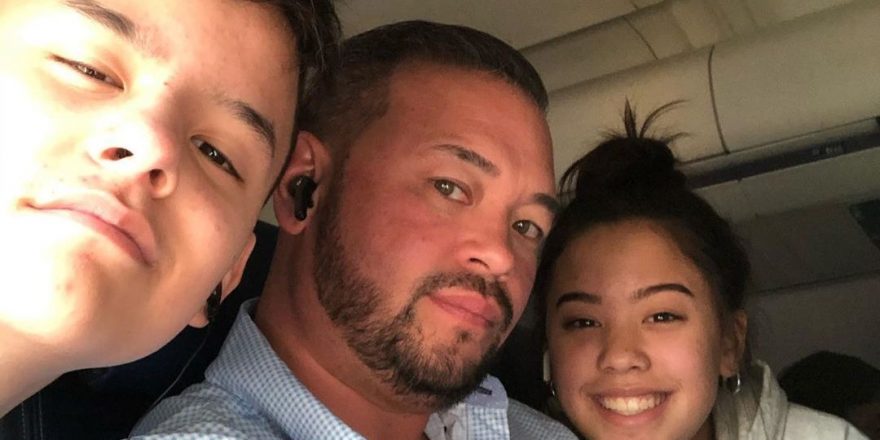 Getting away from it all! Jon Gosselin jetted off to St. Croix with daughter Hannah and son Collin amid his reignited feud with ex-wife Kate Gosselin.

“Hello from our family vacay in St. Croix!!!” Jon, 42, captioned a series of Instagram photos on Saturday, November 23. The former reality star, Hannah, 15, and Collin, also 15, posed for a selfie on the plane. He also posted picturesque shots of the location and a photo of himself near the ocean.

Jon’s girlfriend, Colleen Conrad, joined the Gosselins on their trip. “Love being with my family!!” she wrote of the getaway. One of her pictures showed Collin happily standing on the beach.

The vacation comes after Jon spoke out about Kate, 44, in multiple interviews. The exes announced their split in June 2009 after 10 years of marriage. They share 19-year-old twins Cara and Mady as well as 15-year-old sextuplets Collin, Hannah, Aaden, Joel, Alexis and Leah.

The Couples Therapy alum alleged on The Dr. Oz Show earlier this month that Kate has been “warped” by fame. “I believe that her belief system is skewed,” he said during the Monday, November 18, episode. “That’s what I believe. I believe her intentions in the beginning were good intentions. Bringing kids into the world that she fought to have, these kids. But I think once fame and money got involved, it twisted her belief system. On my end, I’ve been fighting to get my kids off TV forever.”

The DJ spoke exclusively to Us Weekly in October about his struggle to raise his children with the Dancing With the Stars alum. “I don’t think coparenting is ever going to exist between us because we are never going to see eye to eye,” he explained at the time. “We have completely different parenting styles and she still wants to film, but I’m never going to sign work permits. They already went to court and I won but she went against my legal rights.”

Hannah and Collin live with Jon, while the rest of the kids — Aaden, Joel, Alexis, Leah, Cara and Mady — stay with Kate, which makes visitation difficult. “I agree [that they are my children] but their mother puts roadblocks all the way,” he said. “So, at this point, I’ve agreed that as long as Hannah and Collin still talk to their siblings and the kids can interact with each other, then that’s fine with me. I’ll go along. And I don’t have no direct contact as of now.”

Jon claimed in September that he fears for the kids who live with Kate.

Kate has yet to speak out about Jon’s accusations, but she denied his allegations in the past. “I find it very heart breaking that my children’s father chooses a public forum to discuss his current opinions of the ‘development’ of our children,” she wrote in a 2013 blog post. “These opinions are, in reality, value judgements made about our children and they are based on his limited visits (albeit mutually agreed upon) with our children.”

Scroll to see more photos from his vacation with the kids.