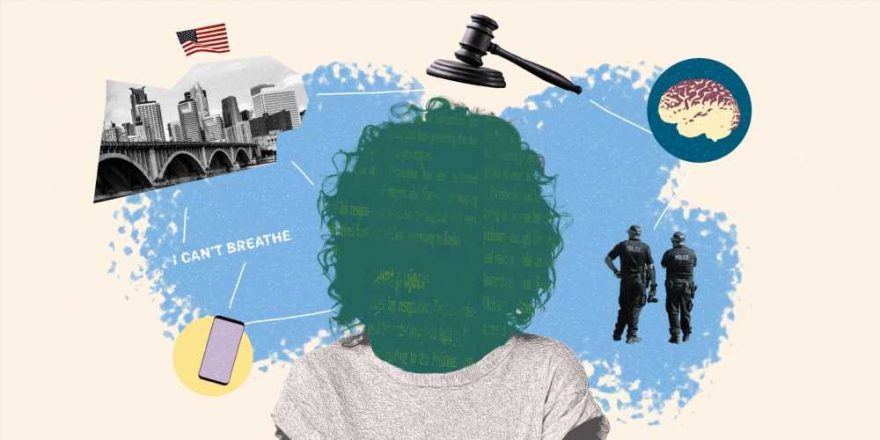 A key element in the case against Derek Chauvin for the murder of George Floyd was a clear video shot by then-17-year-old Darnella Frazier on her phone. Now, Frazier has released her first public comments on her experience a year after Floyd's death.

In an emotional Facebook post, Frazier wrote that she "witnessed a murder" a year ago. "Although this wasn't the first time, I've seen a Black man get killed at the hands of the police, this is the first time I witnessed it happen in front of me. Right in front of my eyes, a few feet away," she said. "I didn't know this man from a can of paint, but I knew his life mattered. I knew that he was in pain. I knew that he was another black man in danger with no power."

Frazier said that it was "just a normal day" for her and that she was simply walking her 9-year-old cousin to the corner store, "not even prepared for what I was about to see, not even knowing my life was going to change on this exact day in those exact moments… it did."

Frazier said the experience "changed" her. "It changed how I viewed life," she continued. "It made me realize how dangerous it is to be Black in America. We shouldn't have to walk on eggshells around police officers, the same people that are supposed to protect and serve. We are looked at as thugs, animals, and criminals, all because of the color of our skin. Why are Black people the only ones viewed this way when every race has some type of wrongdoing? None of us are to judge. We are all human."

Frazier pointed out that she's now 18 but she still holds "the weight and trauma of what I witnessed a year ago."

"It's a little easier now, but I'm not who I used to be," she said. "A part of my childhood was taken from me. My 9-year-old cousin who witnessed the same thing I did got a part of her childhood taken from her." Frazier said she had to leave her home because it was "no longer safe, waking up to reporters at my door, closing my eyes at night only to see a man who is brown like me, lifeless on the ground."

Frazier detailed the anxiety she felt after Floyd's murder. "I couldn't sleep properly for weeks. I used to shake so bad at night my mom had to rock me to sleep," she said. "Hopping from hotel to hotel because we didn't have a home and looking over our back every day in the process. Having panic and anxiety attacks every time I seen a police car, not knowing who to trust because a lot of people are evil with bad intentions."

Frazier says that she holds the "weight" of the experience with her. "A lot of people call me a hero even though I don't see myself as one," she wrote. "I was just in the right place at the right time. Behind this smile, behind these awards, behind the publicity, I'm a girl trying to heal from something I am reminded of every day."

"Everyone talks about the girl who recorded George Floyd's death, but to actually be her is a different story," Frazier said, noting that her entire family was changed by the experience.

Traumatic events can be detrimental to the health and wellbeing of those who witness them. According to the Centers for Disease Control and Prevention (CDC), traumatic events can be marked by a sense of horror, helplessness, serious injury, or the threat of serious injury or death. They affect survivors, rescue workers, and friends and relatives of victims, along with those who have seen the event either firsthand or on TV.

Responses to a traumatic event—known as post-traumatic stress (PTS)—may vary, but they usually include feelings of fear, grief, and depression. A person may also have nausea, dizziness, changes in appetite and sleep pattern, and withdrawal from daily activities. These reactions are normal, Sanam Hafeez, PsyD, a neuropsychologist and teaching faculty member at Columbia University, previously told Health. The symptoms can last for weeks to months before people start to feel normal again, the CDC says.

Sometimes, however, that PTS doesn't go away so quickly and can turn into post-traumatic stress disorder (PTSD). "The American Psychiatric Association defines [PTSD] as a psychiatric disorder that can occur in people who have experienced or witnessed a traumatic event such as a natural disaster, a serious accident, a terrorist act, war/combat, rape, or other violent personal assault," said Dr. Hafeez. Only trained mental health counselor can officially diagnosed PTSD, he added.

"Even though this was a traumatic life-changing experience for me, I'm proud of myself," Frazier said. "If it weren't for my video, the world wouldn't have known the truth. I own that. My video didn't save George Floyd, but it put his murderer away and off the streets."

To get our top stories delivered to your inbox, sign up for the Healthy Living newsletter